The first vintage of a new joint venture between world famous Barbaresco producer Angelo Gaja and Alberto Graci of Graci on Etna, who have joined forces to produce wines on the slopes of Mount Etna, Sicily.

It’s a very refined, beautifully elegant and nuanced red produced from 100% Nerello Mascalese grapes from their Biancavilla vineyard – the first plot of land they purchased on the lesser-known southwest slopes of Sicily’s Mount Etna. The soils in Biancavilla are among the oldest of the entire Etna DOC denomination.

Producer tasting notes – “Sweet aromas, like marzipan, sour black cherry and mulberry rise from the glass. The wine shows notes of candied citrus fruits, tomato leaves and oregano. Idda has a clear expression of ripe and sweet fruit on the palate. Remarkably Burgundian in weight and style for a wine from somewhere so completely different.”

Nerello Mascalese grape – Originally from the city of Mascali (on the seaside, near Taormina), this variety grows between 400 and 1000 m a.s.l (1312-3280 feet) on the slopes of Etna. Its colour is light as Nebbiolo or Pinot Noir, two varieties that shares its elegance, medium body and good ageing potential. The perfumes are exuberant and marked by bloody orange, red fruit, rose, liquorice and flint. Its skin is thin and very delicate to manage both in the vineyard and in the winery. It’s a variety with a lot of vigour and has a very narrow time-window for perfect ripeness. It needs time to perfectly ripen, but must be quickly harvested to avoid spikes of sugar and potential high alcohol content at the expense of ageing potential.

Production notes – The winter of 2016/2017 was rather cold with lavish rain falls. In February an abundant snow shower brought about 80 cm of snow. There was sustained rainfall throughout March. Nevertheless, the beginning of the growing season in April was characterised by sunny days and the increase of temperatures which led to a spring trend on average. From June onwards, the vintage was dry and very warm reaching peaks of 42° C both in July and August. However, beneficial temperature variation between day and night balanced the growing season and increased the flavour concentration of the berries. Very little rainfall followed and only fell close to the time of harvesting in beneficial quantities.

Fermentation and maceration for around three weeks partially in oak and in concrete vats, followed by 24 months of ageing in oak and concrete.

Angelo Gaja has been intrigued with Mount Etna since his friend, the oenologist Giacomo Tachis, first introduced him to its splendor in the late 90’s. In his mind, the powerful image of the mountain has always remained alive.  In 2015, Angelo and Alberto Graci met for the first time, and as they got to better know each other over time, a deep curiosity for their culture and land kept growing, and the desire of working together came naturally. Towards the end of 2016 they decided to form a joint venture naming it Idda meaning ‘SHE’ in the Sicilian dialect.  Idda is also the name the locals have given to Mount Etna – the Sicilians attribute a female nature to the mountain: a strict yet generous mother. 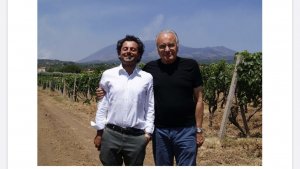 They own 20 hectares of vineyards, between 600m and 800m a.s.l., in the villages of Belpasso and Biancavilla. The grape varieties currently planted are Nerello Mascalese and Carricante.

Compared to other regions of Italy, Etna soils are very young—some as young as 1000 years. They are strictly related to the constant volcanic activity and therefore are very complex and vary greatly in terms of depth and texture, even within the same parcel.

Soils are mainly composed of sand (70-80%), well drained but also very fertile, rich in iron and copper and low in limestone. Each vineyard on Etna is grown on land reclaimed from the volcano with great effort, by moving rocks and creating terraces. The sand and ash soil is so light that even mild inclinations would cause it to drift downhill.