2015 was a dry year for the majority of the vegetative cycle, the month of March receiving 50% less rainfall than usual. Between April and May, the average temperature was higher than average. Three heatwaves were recorded in June and July, with temperatures exceeding 40ºC and this impacted on the vine and the maturation of the grapes. These weather conditions resulted in the vegetative cycle being delayed by around one to two weeks.

The soil in the Douro Valley is made up of schist – a slate-like metamorphic rock that is rich in nutrients and has useful water retention properties. The vines are grown on terraces cut into the steep hillsides of the Douro Valley. The terraces are walled with cut schist to prevent erosion, otherwise torrential rains would wash loose stones down the slopes and into the river. 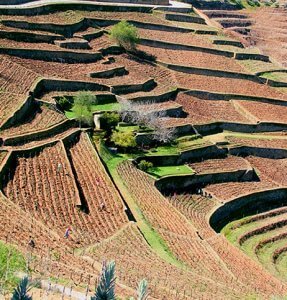 Sandeman LBV was produced by the traditional Port method, with a long, intense maceration during fermentation to extract tannin, colour and flavour from the skins. This was done both by foot-treading in traditional granite lagars (shallow vats), and by pumping over. Fermentation temperatures and densities were carefully monitored to choose the ideal moment to fortify. The wines remained in the Douro until the spring when they were transported to Vila Nova de Gaia to mature in large oak vats. The final blend was created from wines that had been carefully selected by regular tasting and analysis.

There are few more iconic images in the world of wine than the ‘Don’, the logo created for the Sandeman family in 1928 by George Massiot Brown. The cape was modelled on the attire worn by university students in Porto, while the wide-brimmed hat was a nod to the family’s presence in Jerez. Today, the wines are good enough to be every bit as famous as the image of the Don. Today, the wines are becoming every bit as famous as the image of the Don. This hasn’t always been the case, but since the Guedes family bought Sandeman from Seagram in 2002, the major investment that has taken place in the vineyards and the winemaking has seen them rise to the top of the tree in the Port trade.

The new Sandeman winery, built in 2007 with significant investment from the Guedes family, is based at the breathtakingly beautiful Quinta do Seixo, situated on the south bank of the Douro in the Cima-Corgo sub-region. The winery is perched on top of a hill that is garlanded by terrace after terrace of vines, some of which are over 100 years old. Quinta do Seixo covers 42 hectares, planted primarily with Tinta Roriz and Touriga Nacional and boasts an A grade classification in the “Cadastro” ranking system of Douro vineyards. The wines reflect this sustained investment and the skill of winemaker Luís Sottomayor, who joined the company in 1989 and took responsibility for winemaking in the Douro in 2003. Gradually and modestly, he has transformed the fortunes of Sandeman

Food matchGot to be Stilton cheese!