Made using an ancient winemaking technique called “ripasso”. This consists of introducing a part of Valpolicella, produced the preceding autumn, onto Amarone wine marc after these have been decanted in March. The grapes used to produce this wine come from vineyards located on the Moraine Hills in the Valpolicella area.

We are pleased to offer at this Special Price, rrp circa £18.50.

The name of the Tedeschi family is deeply rooted in the history of the Valpolicella Classico wine region with a history that spans nearly four centuries.

The first documents relating to the Tedeschi estate date back to the 17th century; since the 1630s, the family have worked within the region, shaping and influencing its vineyards and landscape. Today their association with Valpolicella, its terroirs and its leading wines is recognised worldwide.

The Tedeschi winery is a premium family-owned and run winery producing renowned classic Veronese wines, including Valpolicella, Amarone, Ripasso and Soave. Lorenzo Tedeschi devoted his life to building the family business, focusing on research and innovation as well as the expansion of the premium vineyard sites. The family have owned the Monte Olmi vineyard since 1918, and produced Recioto there until the 1960’s when Lorenzo started using the grapes to produce Amarone. Then, in 1964, he decided to vinify the grapes separately and to feature the name of this famous single vineyard on an Amarone label. Today, Antonietta, Sabrina and Riccardo continue the legacy of the family-run business. They have further invested in the new vineyard sites of La Fabriseria in Pontare and Maternigo in the Eastern part of Valpolicella. 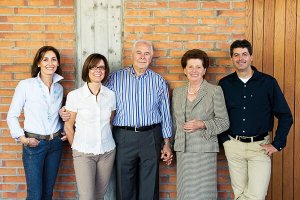