A fascinating and super slick red with beautiful purity and poise.  There is a lot going on – cherry, blueberry, spice, vanilla, chili, dark chocolate and kirsch.  It’s the impeccable balance and elegance that really marks out this wine as something special and different.

“A wine produced from unique and ancient soils”  The 42 hectare estate sits on the bench of the Simonsberg Mountains with its unique vilafontes soils. It is from these unique soils – which are between 750,000 and 1.5 million years old – that the winery derives its name.

Through the collaboration of these three leading industry figures, Vilafonté (which was founded in 1996) became the first American and South African joint wine-making venture, and these days is considered one of the most pioneering wineries in South Africa.

In recognition of this, Vilafonté has twice been nominated as ‘New World Winery of the Year’ by Wine Enthusiast magazine, and also receives some of the most impressive scores and ratings of any South African winery. 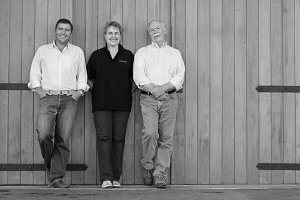 Zelma Long is one of America’s best-known winemakers with an enviable international reputation. She began her wine-making career at the Robert Mondavi winery, where she was soon promoted to Chief Winemaker. Zelma now oversees the winemaking and style development of the Vilafonté wines, working with the winemaker Chris de Vries. She is on site during the harvest, through pressing and barrelling, and then again at the blending and bottling stages. Mike Ratcliffe, co-founder of Vilafonté, is a leader in the Cape wine industry, and for many years has been keenly involved in black economic empowerment and land redistribution. Dr Phil Freese is the creator of the Vilafonté vineyard which he calls ‘different by design’. Having spent 13 years as Robert Mondavi’s Vice-President of Wine Growing, he designed and planted the first Opus One vineyards. He also initiated the remote sensing project with NASA which has provided modern technology for vineyard analysis and quality enhancement. Phil works with Vilafonté winegrower Edward Pietersen. This effective wine-growing combination continues to elevate the quality of the Vilafonté fruit to a level commensurate with the production of the world’s finest wines.