Oh wow! Beauty and the Beast – all the wild and savage power of Malbec tamed to give you a multi-nuanced wine of breathtaking precision and focus.  So many flavours, scents and underlying minerality.  Truly world class.

98pts Wine Advocate, June 2018
As with the whole collection of 2015s from the high end, the single-vineyard 2015 Finca Piedra Infinita reveals a gobsmacking selection from shallow soils that produce super austere Malbec wines with reticent noses, with more influence from the vinification with full clusters and less oak than ever. The palate shows marked influence from the limestone soils. As I’ve seen in some of these top reds from Argentina, this is not about the variety at all, it’s about the soils. And in this case, the wine even seems to transcend the vintage character, as their work has gained so much in precision that the wines are better every year. Where will the limit be? 2015 was not an easy year, yet the wine is better than ever. With time in the glass, the aromas that emerge are more about the herbs in the countryside than fruit – rock rose, thyme, etc. It has to be the finest wine I have ever tasted from Zuccardi. Beautiful. Drink 2018 – 2030. 5,000 bottles were filled in December 2016.  Luis Gutierrez

View the other wines we stock from Zuccardi 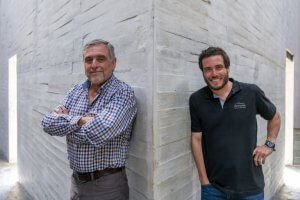 Food matchThe best steak and chips your money can buy!